The natural cervical intervertebral disc is an amazing mechanical structure from an engineering perspective. It has the ability to absorb a large compressive load while still providing an impressive range of motion between the bones in the neck. Duplicating the natural disc's form and function with a synthetic—or artificial—disc is challenging. However, several artificial cervical discs have been developed and are available as a surgical option for patients with symptomatic cervical disc problems.

What Is an Artificial Cervical Disc?

An artificial cervical disc is a device inserted between two vertebrae in the neck to replace a damaged disc.

The intent of the artificial disc is to preserve motion at the disc space. It is an alternative to the commonly performed anterior cervical discectomy and fusion (ACDF), a surgical procedure that is designed to address the pathology by eliminating motion at the diseased disc level.

Artificial disc replacement (ADR) surgery—also known as a total disc arthroplasty or total disc replacement (TDR)—is performed for a patient with a cervical disc herniation that is causing significant neck pain and/or arm pain that has not responded to nonsurgical treatment options and is significantly affecting the individual's quality of life and ability to function.

The theoretical advantages of the artificial cervical disc compared with a fusion include:

As with all operations, there are potential risks and complications associated with cervical artificial disc replacement.

Indications for a Cervical Disc replacement

The indications for a cervical disc replacement are similar to those for a cervical discectomy and fusion (ACDF). A patient must have a symptomatic cervical disc, which may be causing arm pain, arm weakness or numbness, and/or some degree of neck pain. These symptoms may be due to a herniated disc and/or osteophytes (bone spurs) compressing adjacent nerves or the spinal cord. This condition most commonly occurs at cervical spine levels C4-C5, C5-C6, or C6-C7.

Prior to being considered for a cervical disc replacement, the candidate must usually meet defined criteria, such as:

The standard surgical procedure for a cervical disc replacement requires an anterior approach (from the front) to the cervical spine. This surgical approach is the same as that used for an anterior cervical discectomy and fusion (ACDF) operation.

The cervical ADR surgery will typically include the following:

Postoperatively, the patient can go home within 24 hours with minimal activity limitations. 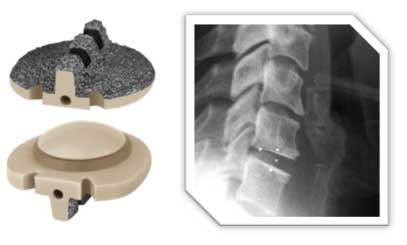